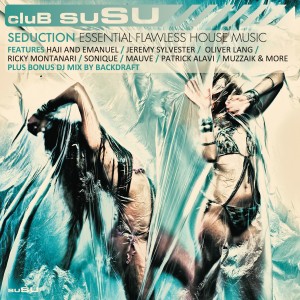 cluB suSU is a compilation that is synonymous with quality house beats,The new ‘Seduction’ album is another classic with seductive suSU artwork, and more club bangers than the 2012 NYE celebrations!

From suSU, the goodies on offer include Haji & Emanuel’s remix of Sonique’s ‘Tonight’ Oliver Lang’s dancefloor smash ‘Bomb The Terrace’, Lee Coombs at his most deadliest ‘Shiver’

The offerings from outside suSU are just as vibrant including man of the moment Jeremy Sylvester’s ‘Got Soul’ which has won acclaim from the headz from its release on Azuli. Plus…world exclusive classic mix from Grant Nelson on ‘R U Sleepin’

The bonus DJ Mix is much more than a token bonus offering: Backdraft have played at some of the biggest clubs around the world and mixed some of the dance communities hottest tunes, We start with I Believe by Ricky Montanari segueing into ‘Power’ meeting the Vox mix of Haji & Emanuel’s ‘Weekend’ finally finishing with the original mix of ‘Shiver’…this is a musical journey par excellence.